Once you have collected your heights from a laser its time to work out where is or where is going to be level. Taking into consideration buildings that are permanently attached and other fixtures the level point may be able to be varied or it may have to be at a particular height.

If all goes well at that point and your able to lift the building to approx 50mm above your predetermined level point you can proceed to support the building useing counterbalance technique described following otherwise you will need to find the post that are pushing the weight down, usually the highest one(s) on the outside of the house. Then working around the perimeter starting from this post or group of post work both ways around the building bringing the outside up to the same height as the starting point or high post(s) that is causing the pressure on the centre.

Once you've done that you should be able to return to the centre and start counterbalancing the structure.

At least 4 steel frames will need to be incorporated into your levelling process however most of the rest can be props made from the post themselves or some other suitable means. By incorporating at least 4 frames your holding it from moving forward backward or sideways and depending on how long it will be like this will determine the extent or quality of your centre supports. 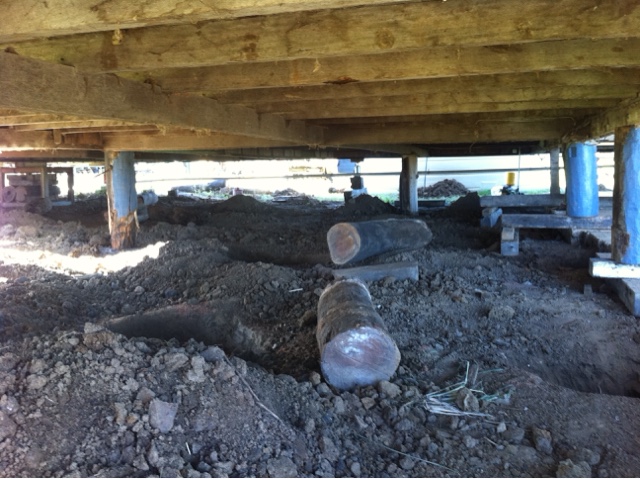 As you move from the centre out you can counterbalance long sections of bearer leaving the under part of the house relatively clear and keeping in mind that we are lifting to 50mm above level, not! level reason to which will become obvious when it comes time to hang the new posts from the bearers, ultimately allowing for precision accuracy.

Heavy sections can be ascertained by looking for condensed internal structures such as rooms, wardrobes etc and place your support nearest to centre of these hot spots. It is sometimes very obvious which part to jack from that will cause it to spring up and counterbalance other times you will need to look inside and out and trial different locations. As can be seen the counterbalancing allows you to keep clear with minimal support hindering the rest of the processes.